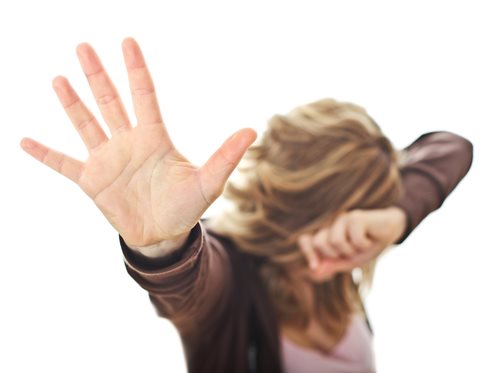 Battered Women defined:
Battered women are those individuals who suffer from battered woman syndrome. This classification, which is used in the court of law to demonstrate a relationship of perpetual violence.
Battered women are typically those individuals involved in a romantic relationship, such as a courtship or a marriage, who fall victim to habitual abuse that is administered in a physical or emotional fashion. Battered women, according to the rule of law and various professionals, experience an abusive cycle that is intertwined with the generic dependency issues, which exist in an intimate relationship.
Battered women repeat a distinct cycle multiple times. The cycle has three specific phases: First, the couple or woman involved in a relationship must go through a tension-building phase; this portion of the cycle includes a build-up of fear and reticence. This initial stage is followed by the administration of an acute or explosive battering incident; the fearful actions precipitate a violent or aggressive action by the male in the relationship, typically to demonstrate power in the relationship.
Ultimately the second phase of the battered woman cycle culminates in a loving respite, known as the honeymoon phase. This cycle is constant for battered women; as one can acknowledge the drastic displays of emotion and the resolve after the violent or hurtful incident pinpoints a severely unhealthy relationship.
The battered women cycle reveals one of the most signifying characteristics of the syndrome; no matter how bad the explosive act is in regards to violence or emotional damage, the woman tends to stay in the abusive relationship for an extended period of time.
General Characteristics of Battered Women:
Battered women believe that the violence inflicted is their fault.
Battered women are incapable of placing the responsibility for the violent actions elsewhere.
Battered women will perpetually fear for their lives and the life/lives of her children.
Battered women possess an irrational belief that the abusive party is omniscient and omnipresent.
Why do Battered Women stay in an Abusive Relationship?
Battered women stay in their abusive relationships for a variety of reasons and because of numerous external factors. Among the reasons, women are positively reinforced during the honeymoon phase; the husband or male, who inflicts pain on his partner, will perpetually try to make-up for his abusive actions by tantalizing the woman with kind words, gifts or the promise of some form of security. Through these promises or reinforcement the woman, who often acts as the peacekeeper in the relationship, will tend to manipulate her into thinking the relationship is salvageable.
Adverse economic consequences is also a reason why battered women stay in their abusive relationships; married couples, through tax incentives and other benefits typically enjoy a greater sense of financial security if they stay together. Furthermore, in many relationships the male is the so-called “breadwinner” which places the woman in, some cases, a financial handcuff on the individual.
Other victims of battered woman syndrome will find it more dangerous to leave the abusive relationship than to stay in it. Perhaps the most common reason why an individual with battered woman syndrome stays in an abusive relationship is because of the presence of children; victims, often times, sacrifice their health for the sake of their children growing up with both parents.