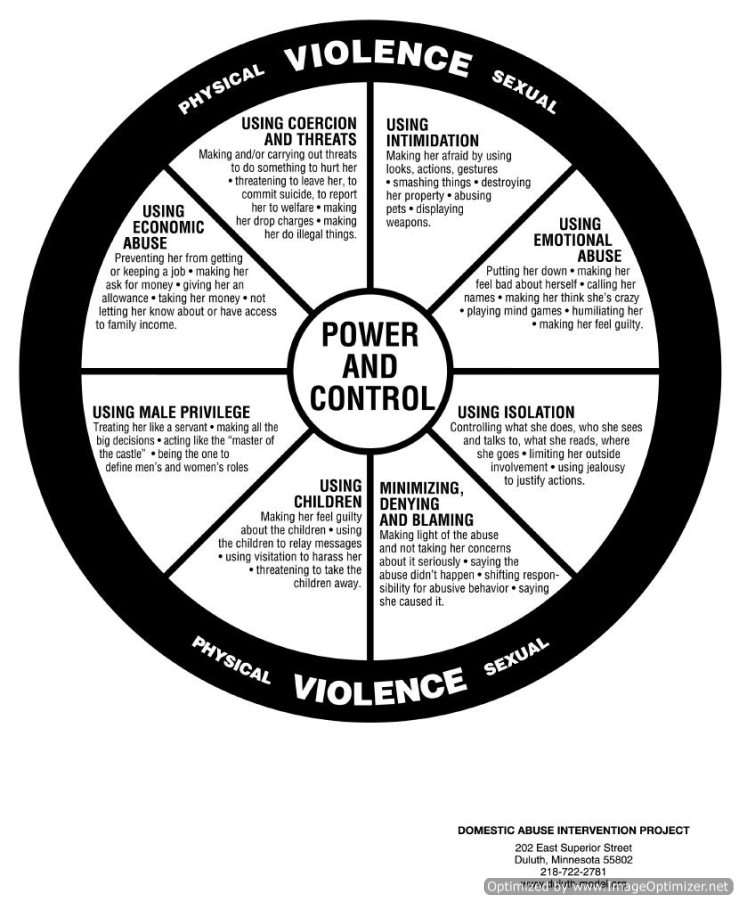 The Power and Control Wheel is a visual representation of the tactics often used by men who batter. Here, batter is defined as the continuous pattern of abuse, violence and coercion in an intimate relationship.

The Power and Control Wheel design was the creation of Ellen Pence, Coral McDonnell and Michael Paymar  in 1982 as part of the curriculum for a court ordered program for batterers. The Power and Control Wheel was developed from the experiences of abused women who attended educational and support groups in Duluth, Minnesota. They were asked, “What do you want taught in court ordered groups for men who batter?”

Their responses expressed the need to bring the reality of battering out into the open. That meant that the lived experience of what actually occurs in a battering relationship needed to be both exposed and recognized. Through the probing of the designers of the Power and Control Wheel, the abused women began to reveal the tactics their intimate partners used to maintain control over them. Although violence was very common, other, less recognized but equally important were other tactics of maintaining power. These included the use of money, psychological and emotional put downs, the children, undermining social relationships and self-esteem, nonstop criticism of women’s style of mothering, various forms of expressing male privilege and intimidation to maintain power and control. The designers adjusted and revised the graphic over several weeks until the groups of women felt satisfied that the Power and Control Wheel had captured their experience of living with a violent intimate partner.

The Power and Control Wheel is a conceptual tool rather than a theory. It is meant to help people see the patterns in behavior and the significance they have. It is meant to capture the primary tactics, rather than every single tactic of control. Of course, not all empirical cases will correspond precisely to the Power and Control Wheel. The Power and Control Wheel is based on the experiences of women in opposite-sex relationships. The battered women did not identify a desire for control or power as what was motivating their partners’ abusive behaviors, but, rather, batterers obtained control and power in the relationship as a result of those behaviors.

By 1984 McDonnell, Paymar and Pence reached the conclusion that identifying positive and not just negative behaviors in their training program for batterers could aid men in changing their ways. Following the same method used in devising the Power and Control Wheel, they developed the Equality Wheel to describe behaviors that defined intimate relationships based on equality. Lakota users of the two wheels adapted the shape of the Power and Control Wheel to that of a triangle in 1995. (Pine Ridge, Sacred Circle Project). They felt that the shape of a triangle fitted better the originator’s understanding of how, in an abusive relationship, violence and other tactics of power are meant to maintain and establish dominance over the victim. These tactics do not in and of themselves constitute battering. Battering is the intentional and patterned use of such tactics to gain and retain control over the victim’s autonomy and deny her a life free of intimidation and fear.

For more information on Mending the Sacred Hoop and violence against Native Women, please visit their page.